Connecting the best of both worlds: ontologies and vocabularies in metaphactory 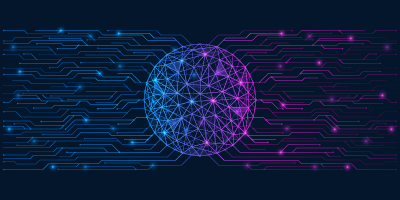 The terms "ontology" and "vocabulary" are often used interchangeably. However, more often than not, this leads to confusion among customers who want to semantically model their domain and results in questions about whether there is in fact a distinction between the two and whether both are needed to implement a knowledge graph.

The meta-layers that these terms describe have been captured by different standards (OWL and SKOS respectively) and we at metaphacts believe that there is value in treating both as individual but complementary assets in their own right.

Let's first look at how we define these two concepts:

Ontologies are semantic data models that define the types of entities that exist in a domain and the properties that can be used to describe them. An ontology combines a representation, formal naming, and definition of the elements (such as classes, attributes, and relations) that define the domain of discourse. You may think of it as the logical graph model that defines what types (sets) of entities exist, their shared attributes, and logical relations. For ontologies, metaphactory builds upon OWL and SHACL as open standards. You can learn more about ontology modeling in metaphactory in this blog post »

Vocabularies are controlled term collections organized in concept schemes that support knowledge graph experts, domain experts, and business users in capturing business-relevant terminology, i.e., synonyms, hyponyms, spelling, and language variations. A term could include preferred and alternative labels (synonyms) in multiple languages and carries natural language definitions. Terms can be related to each other, i.e., a term is equal, broader/narrower (hyponyms), or defined as loosely related. The most common examples of different types of vocabularies are thesauri, taxonomies, terminologies, glossaries, classification schemes, and subject headings, which can be managed within metaphactory using SKOS as an open standard. You can learn more about vocabulary management in metaphactory in this blog post »

For example, an ontology may define that agents have roles in an organization. The particular agents (i.e., a specific person) or the kind of roles are considered instance data of the graph, whereas part of this instance data like role kinds (software engineer, software architect, etc.) might be managed as controlled vocabularies. As recently described by Katariina Kari from IKEA, you may look at this as the three layers of the knowledge graph, where the vocabularies are the layer between the ontology and instance data (c.f. also graphic below).

In addition, these artifacts also play an important role in terms of governance and expertise required. metaphactory's visual ontology interface allows domain experts and business users to contribute to building the logical model, although ontologies may still be owned and maintained by ontology and knowledge graph engineers. On the other hand, vocabularies capture business-relevant terms and require the knowledge of users who are experts in their domain and can help create a shared terminology. Once the vocabulary is created and its basic structure and design rationale is defined, it can be owned and maintained by subject matter experts, e.g., in the role of data stewards. 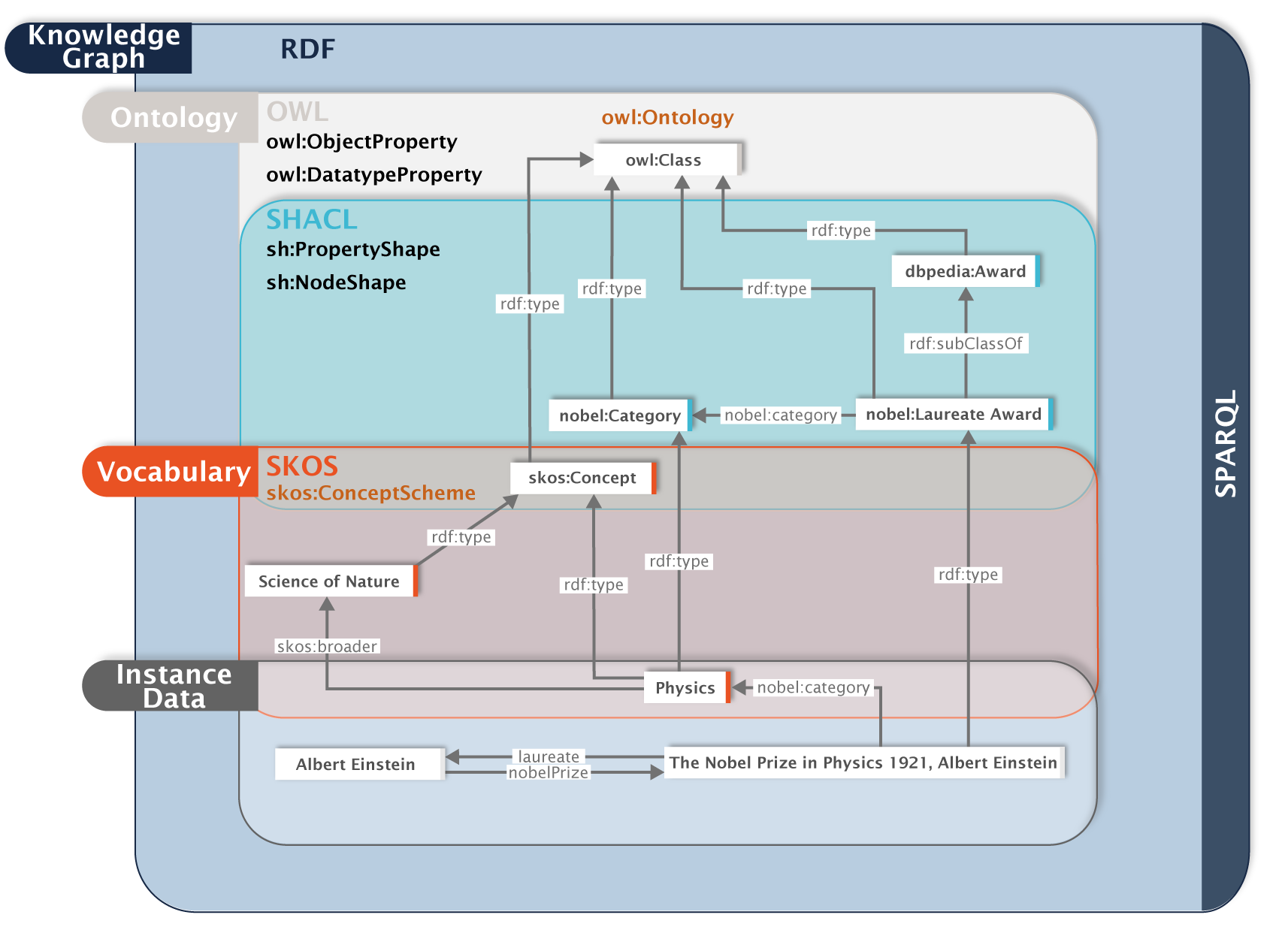 RDF: Encode everything in the RDF 1.1 graph model stored in any RDF 1.1 & SPARQL 1.1 compliant database for querying. Built up on central Web and XML standards like URI & namespaces, it supports several open & standardized serialization formats for exchange without vendor lock-in.

SKOS: Define concepts as controlled terms (categorical names, synonyms, identifiers & description in various languages), helping to annotate, structure & query data vertically on the instance level. Terms are instances themselves, i.e., they are instance of skos:Concept. They are not part of the logical data model and as such, for example, do not change the validation logic.

However, these assets do not need to live on their own or be managed in silos, but they complement each other and provide additional context for end users.

The Nobel Prize Dataset1 is a public dataset available as a Semantic Knowledge Graph, i.e., it is published in RDF through a public SPARQL endpoint and described by an OWL ontology (see RDF/XML version). The ontology and dataset include information about all Laureates (Persons, Organizations) who have received a Nobel Prize Laureate Award in a certain Nobel Prize category, or a share thereof, ever since the inception of the Nobel Prize. We augmented the Nobel Prize ontology with SHACL shapes to also model relevant constraints such as cardinalities and range constraints including class and data type assertions, as depicted in the ontology diagram below: 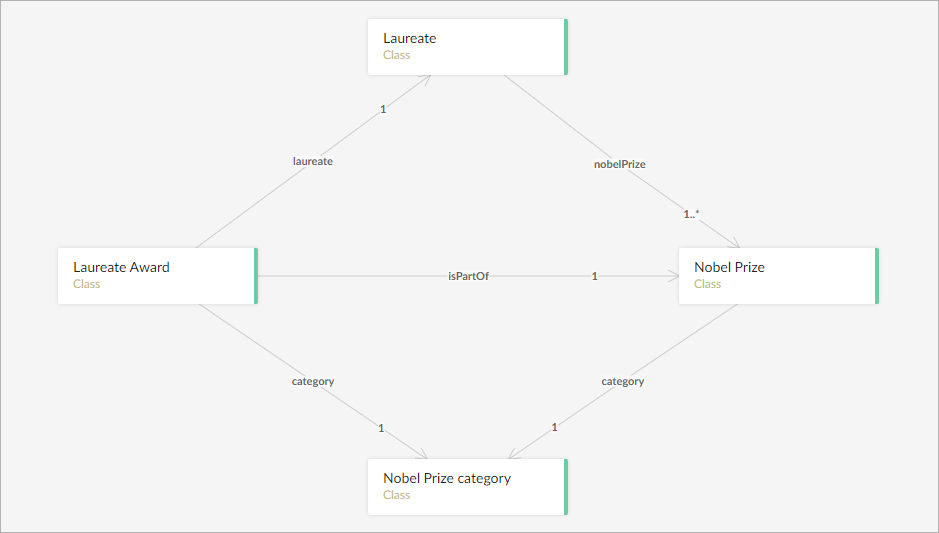 When it comes to vocabularies, the situation is a bit more complex as there is no single, standard, or best practice on how ontologies can be connected to vocabularies. Most of the time, we see the so-called semi-formal hybrid modeling pattern.

For example, the human readable documentation of the Nobel Prize ontology has an explicit section called "Vocabularies". However, in the original OWL version of the Nobel Prize ontology, categories are declared and enumerated within the ontology itself as OWL individuals and they are only implicility classified as skos:Concept. As a consequence, there is no split between ontology and vocabulary maintenance.

To overcome these limitations, we have introduced in metaphactory 4.5 the ability to link the ontology to a vocabulary through a SHACL "restriction on a class" (technically, we apply a restriction to all relations leading to that class) - in this case the Laureate Award class. Users (ontology engineers or domain experts) can apply this restriction using metaphactory's visual ontology editor as demonstrated in the screenshot below:

A class can be either restricted to an entire vocabulary (SKOS concept scheme), a collection (SKOS collection), or a particular sub-tree within a vocabulary.

Let's now look at two examples on how the knowledge captured in the model - namely the linkage from the ontology to the vocabulary - drives application logic in metaphactory. We can use metaphactory's intuitive wizard to build a search interface that picks up the vocabulary restriction we defined before. First, we'll select the type of search we want to have, in this case metaphactory's keyword-type search, and we enable faceted filtering:

Then, we'll select the classes from the ontology that we want to include, in this case Nobel Prize and Laureate.

Finally, we'll select the relevant attributes and relations from the ontology - in this case all:

The wizard will generate a configuration code as well as a live preview. The live preview - see screenshot below - allows us to test the resulting search and refine the configuration by going back in the wizard steps, before finally adding it to the application page.

As we can see in the screenshot above, the faceted filter for Category now has a hierarchical structure, as defined in the vocabulary. By exposing this hierarchical vocabulary structure to our search filter, we offer a new level of abstraction to our search and allow end users to filter by broader terms (hypernyms) which automatically groups the narrower terms together. This helps end users to formulate and iteratively refine their information needs. The beauty lies in the fact that recall and precision of searches through changes in the vocabularies, i.e., the labels, synonyms, and relations to other Nobel Prize category terms, can be used for indexing and query expansion, without touching the actual instance data (e.g., every individual Nobel Prize) and, as such, information retrieval tasks can greatly benefit from the decentralized management of terminology.

Similarly, this can benefit annotation use cases in the context of model-driven instance authoring., For example, a semantic-form with reference to the class Laureate Award is configured through this simple HTML5 markup and allows end users to populate the Laureate Award class with instances from the vocabulary only, by presenting the user with a hierarchical tree selector driven by and limited to the structure of the vocabulary:

Alternatively, we can also use the form wizard to visually select the class from the ontology (i.e., without having to copy or remember the class identifier) and bootstrap the initial template code for incremental configuration and styling:

To learn more about model-driven semantic forms in metaphactory, have a look at this blog post »

Side Note: While the interlinking of ontologies with vocabularies focuses particularly on leveraging hierarchical structures in terminology, it is of course also possible to encode, expose, and exploit other hierarchical relationships other than broader/narrower relations. Common use cases are place hierarchies or part of relations, which are not necessarily well captured through broader/narrower relations in SKOS vocabularies and are not maintained as terminology. This can be done by adjusting the configuration, both in search and in forms: 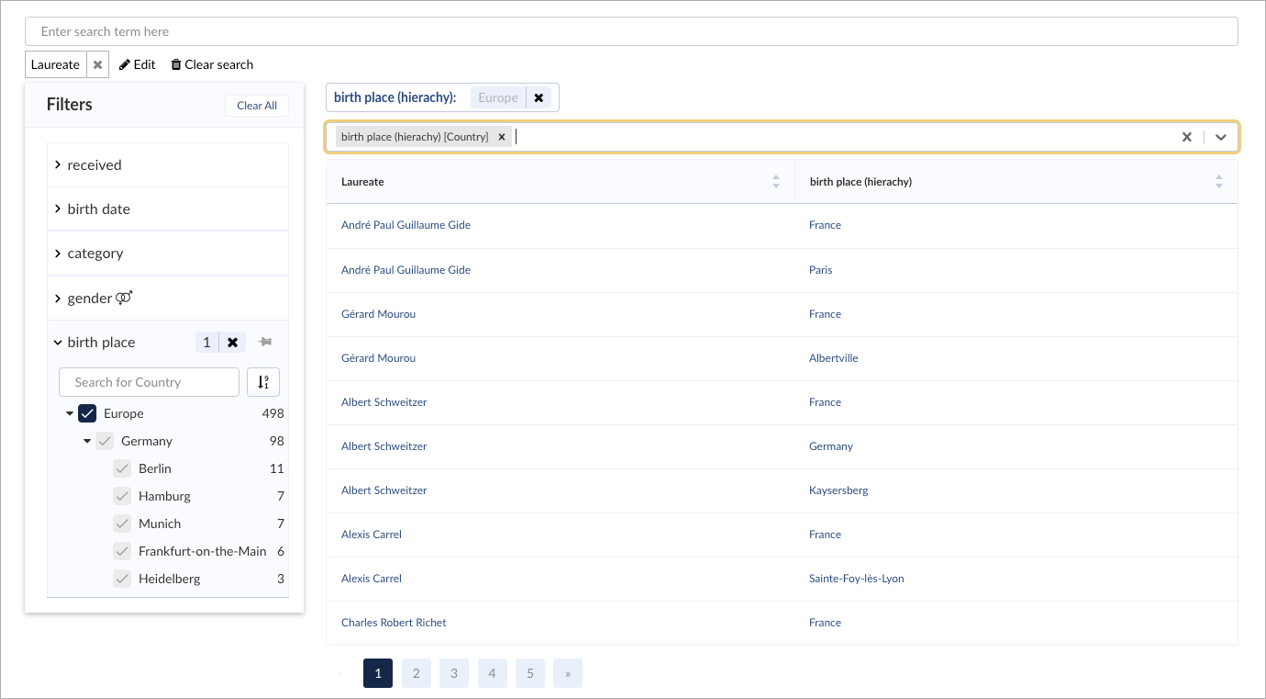 This sounds cool! How can I try it myself?

To test metaphactory's semantic modeling capabilities, you can get started with metaphactory today using our 14-day free trial. If you'd like to reproduce the examples in this blog post, you can load the Nobel Prize dataset into your metaphactory instance by pasting the code snippet below into the SPARQL tab.

Footnotes
1This public dataset is licensed under Creative Commons Zero (CC0) and free to use as stated by the Terms & Conditions of the Nobel Prize website.

As Product Manager at metaphacts, Johannes collaborates with customers and the professional services team to identify customer needs, he articulates product features that successfully address these needs, and he works with the software engineering team to turn the product vision into reality.