Written by Dmitry Pavlov on 25 May 2022. Posted in Authoring

In this blog post, we will provide an introduction to semantic forms in metaphactory and discuss how they support data authoring use cases on top of knowledge graphs. To demonstrate how metaphactory's semantic forms work in practice, we will look at a practical example and will augment the Nobel Prize Dataset with information about scholarly articles. The Nobel Prize Dataset is a public dataset available as a Semantic Knowledge Graph, i.e., it is published in RDF and described by an OWL ontology. We extended the ontology with SHACL shapes to also model relevant constraints which can be utilized within the forms. The ontology and dataset include information about all Laureates (Persons, Organizations) who have received a Nobel Prize Laureate Award in a certain Category, or a share thereof, ever since the inception of the Nobel Prize2. Our aim will be to extend this information to include details about scholarly articles published by these laureates.

As mentioned above, metaphactory's semantic form component allows you to generate end-user oriented authoring forms based on the underlying ontology (semantic model), i.e., for any class represented in that ontology. However, in many cases, the intent is to author a complete subgraph encompassing several connected classes, while providing a simple authoring form to end users. Therefore, the forms can be configured to enable authoring of complete subgraphs, while keeping a very simple interaction for the end user.

The information provided by end users through the input form is converted to knowledge graph entities (or instance data) and is immediately accessible, explorable, and searchable within the knowledge graph and through various interfaces, like metaphactory's multiple search interfaces.

The diagram below illustrates the data model3 that will be used, including the relations between the classes and the attributes for the ScholarlyArticle class. 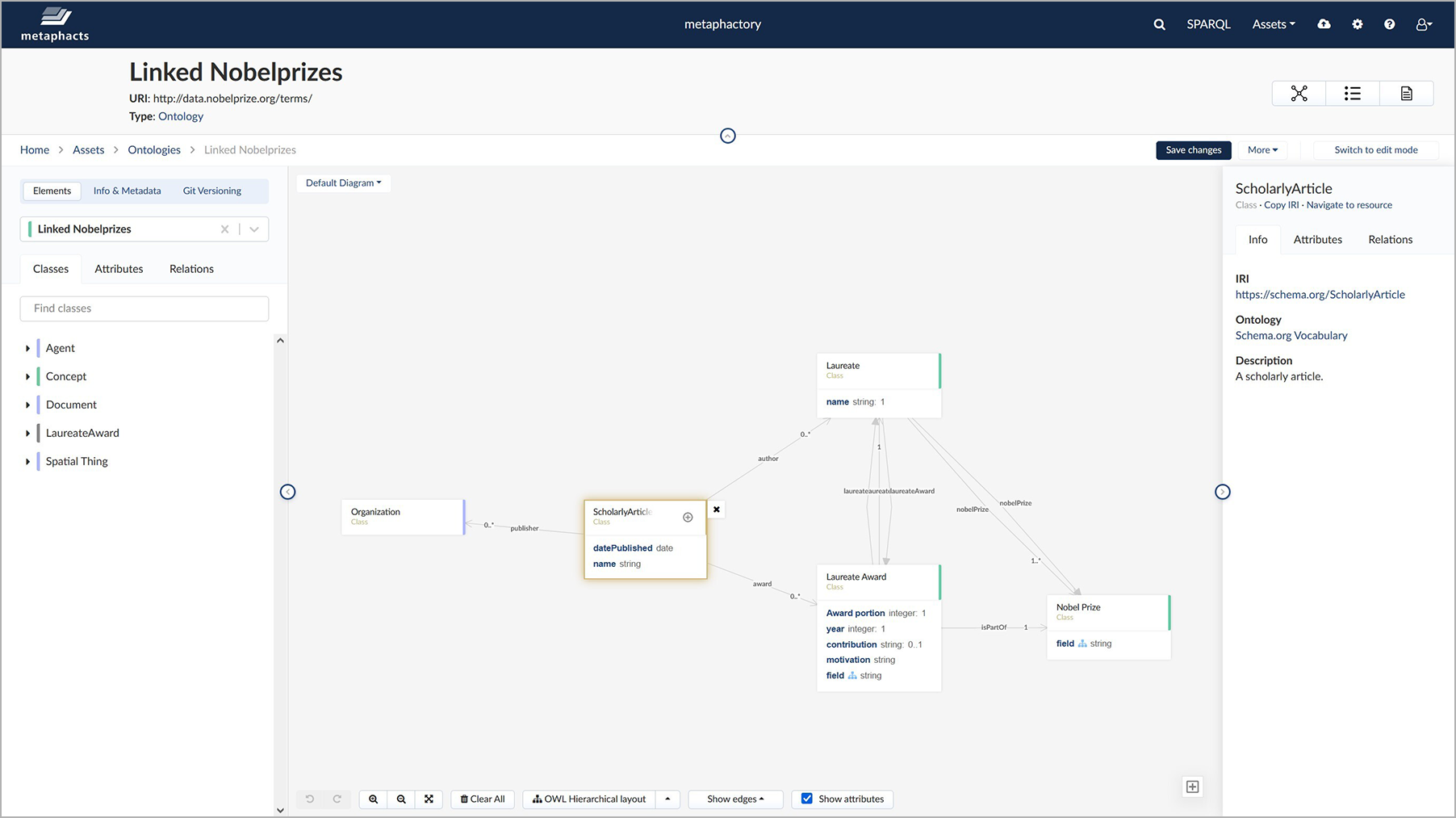 The data model used in this example, based on the Nobel Prize ontology and schema.org ontology

Please note that this is only a small subset of the overall ontology and also only a subset of the attributes for this one class.

Let's take a closer look at how configuring and using metaphactory's semantic forms works in practice.

The wizard will also allow us to determine the order in which the input fields will be presented in the UI. 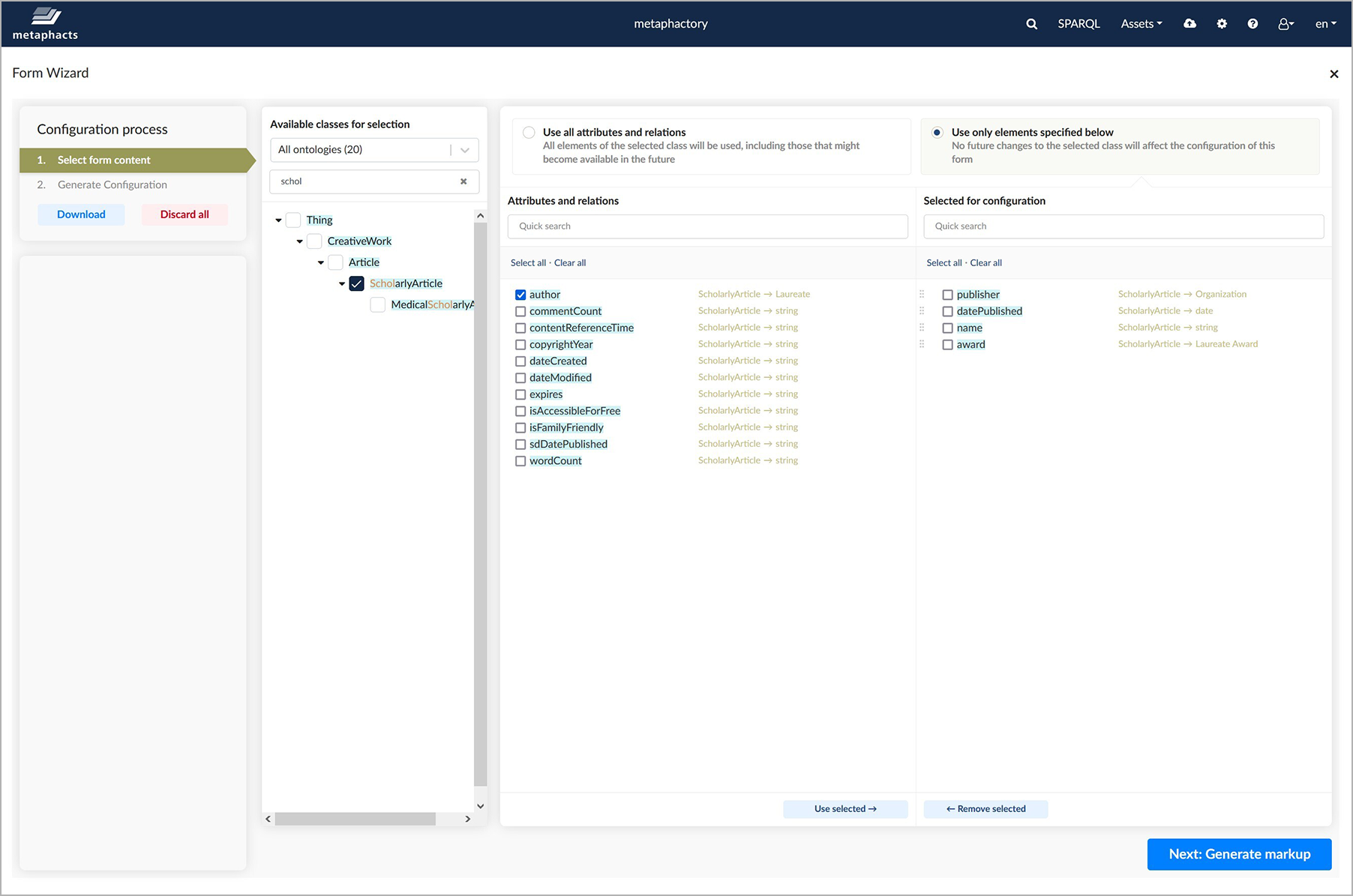 The ScholarlyArticle class in the ontology inherits over a 100 attributes from more generic schema.org superclasses Thing and CreativeWork. Filling out all of these fields is not required for our purpose, so we limit the fields of the form to the essential ones: the name of an article, its publication date, its author, its publisher, and an associated Nobel Prize award. 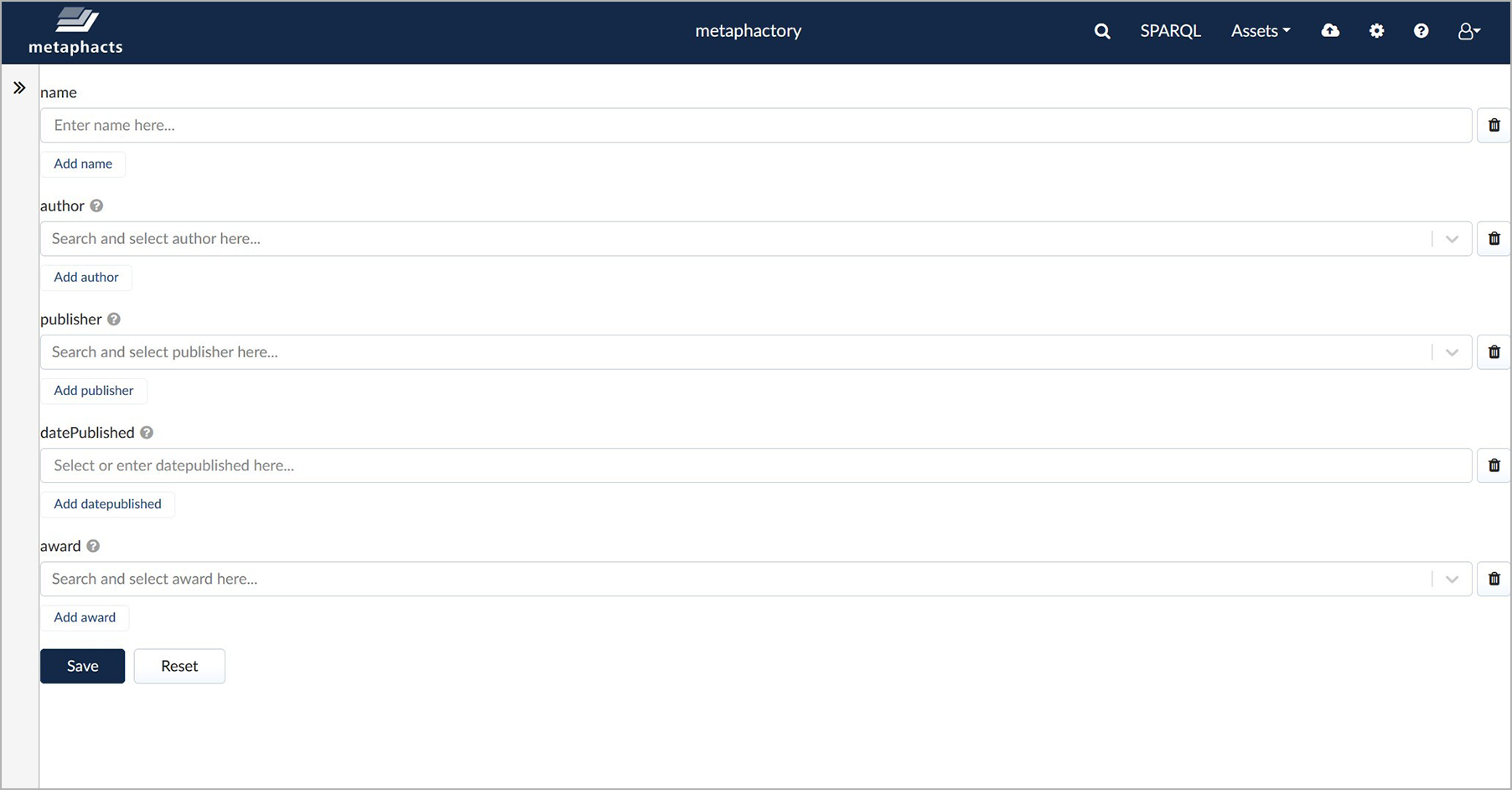 The markup generated by the wizard renders a concise end-user form, including auto-suggestion, date picker, and other convenient settings derived from the ontology definition.

To make the authoring process even simpler and more intuitive for end users, we also include the ability to create new publishers (i.e., new Organization entities for the publisher relation) directly in the form, using a pop-up dialog. 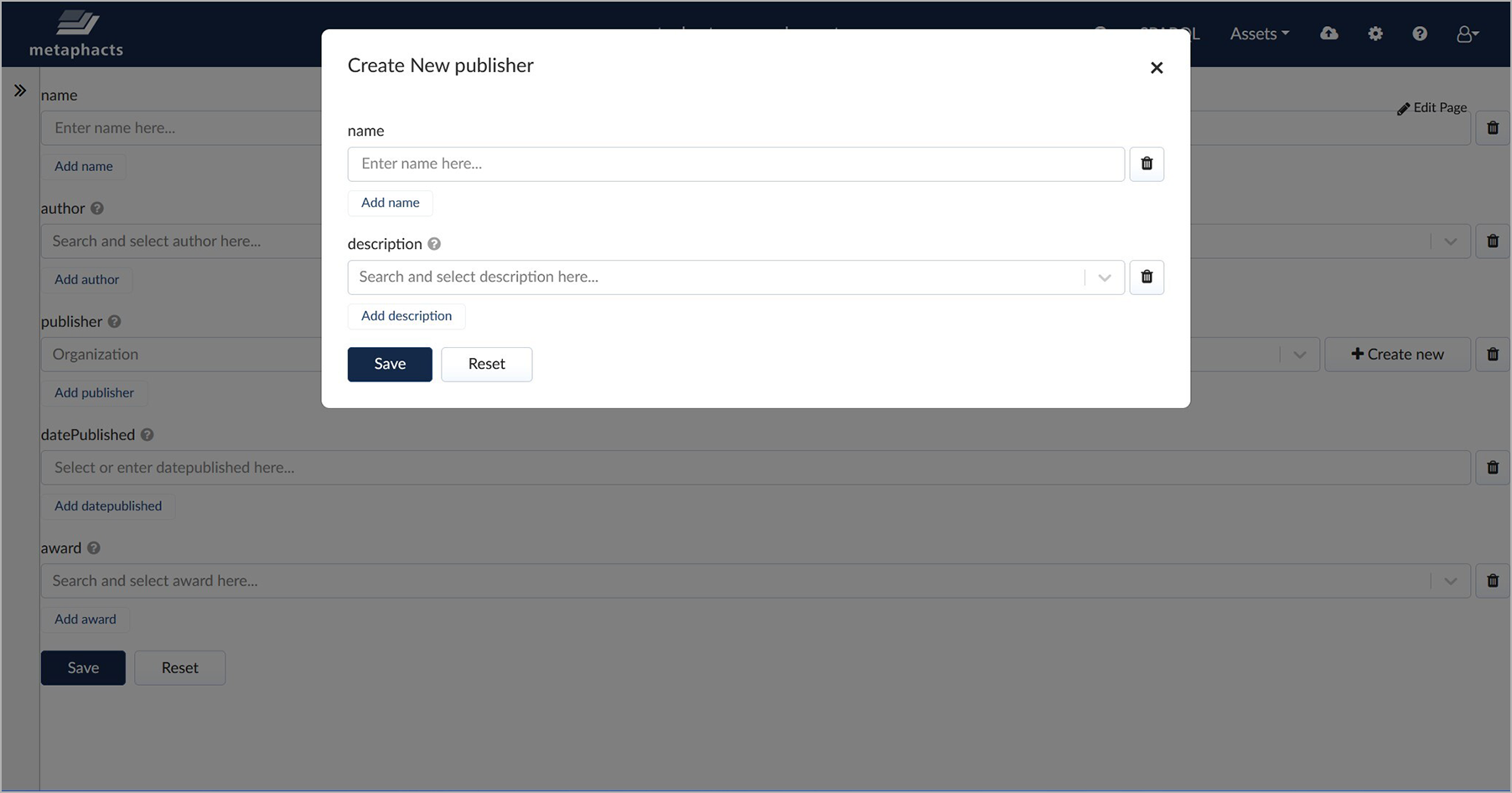 Creation of instance data for other classes from within the form

As an alternative, we can also create a form with composite inputs allowing for the inline creation of publishers when entering data for a new scholarly article. 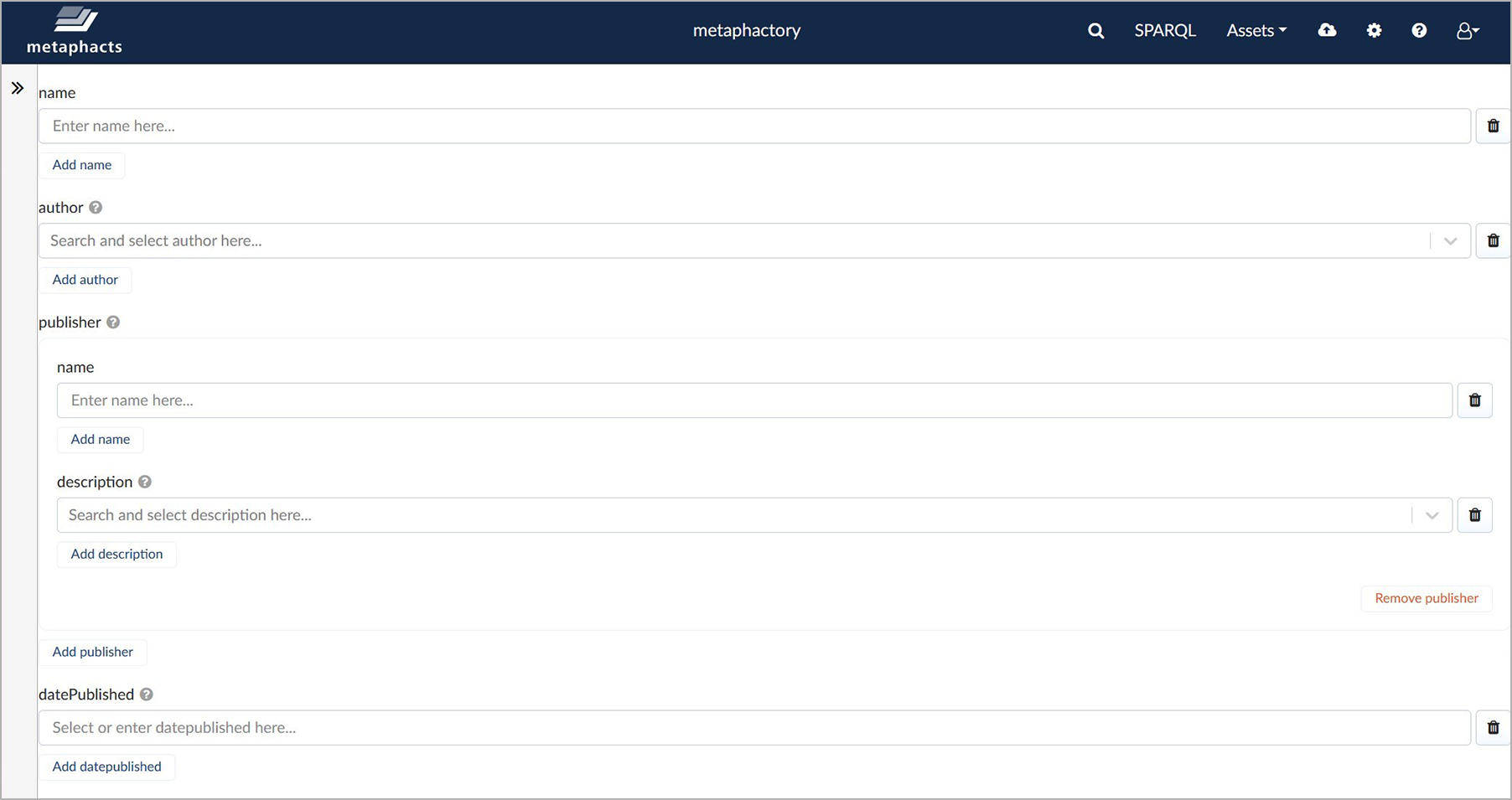 This allows us to maintain the optimal knowledge representation in the model, while providing a simplified interface for entering data.

Finally, using HTML and CSS, we can adjust the styling and design of the form and add some instructions for end users. 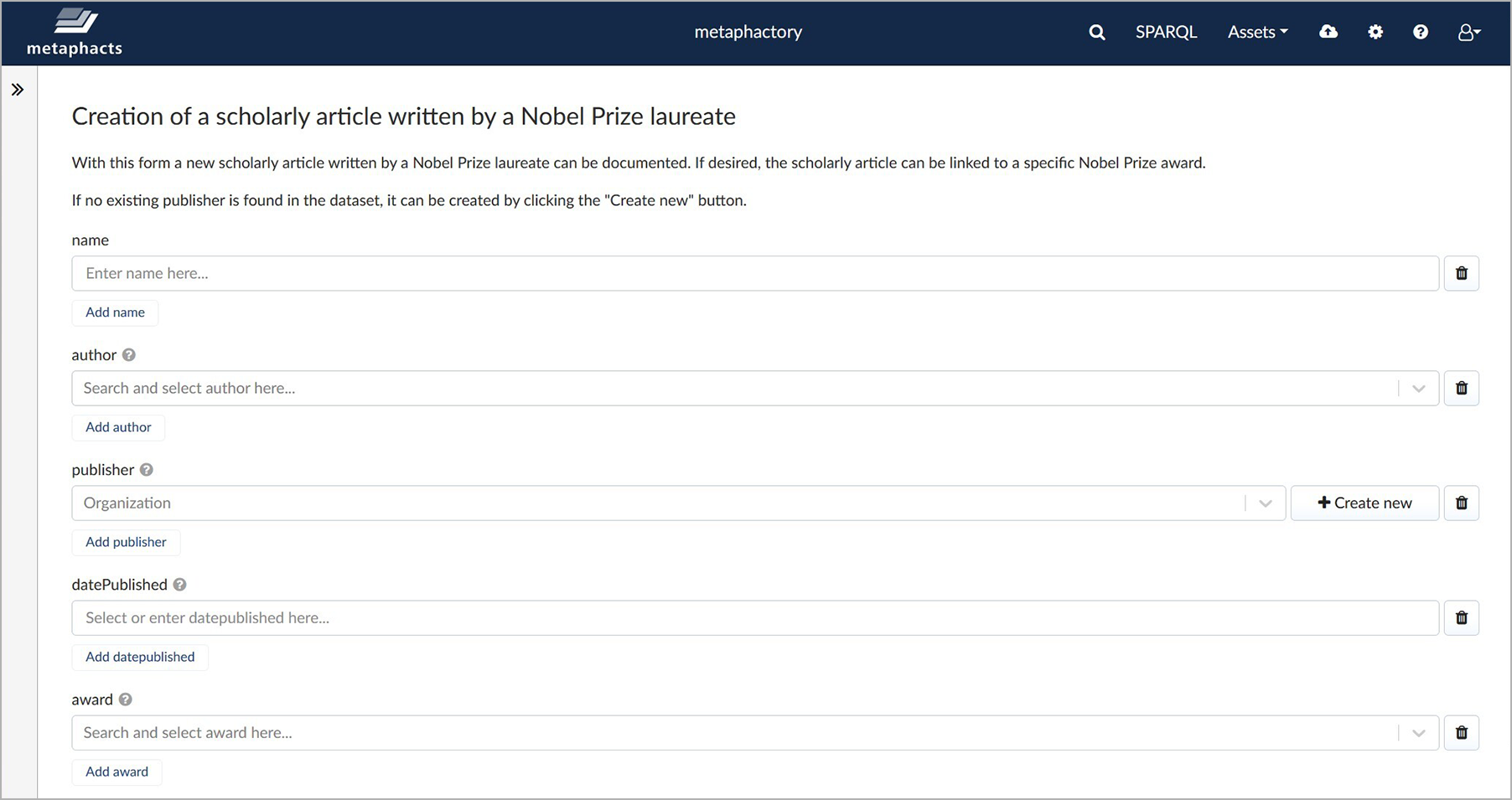 Styling forms in metaphactory is easy with HTML & CSS

The final configuration for the form is still simple and can easily adjust and be adjusted as the ontology changes:

Now that we have our form prepared, we can actually create a new scholarly article.

In the screenshot below, we use the created form to document that Elias James Corey wrote an article titled "Retrosynthetic Thinking – Essentials and Examples", which was published in the "Chemical Society Reviews" journal in 1988 and this, together with other publications, led to him becoming a Nobel laureate in Chemistry in 1990. 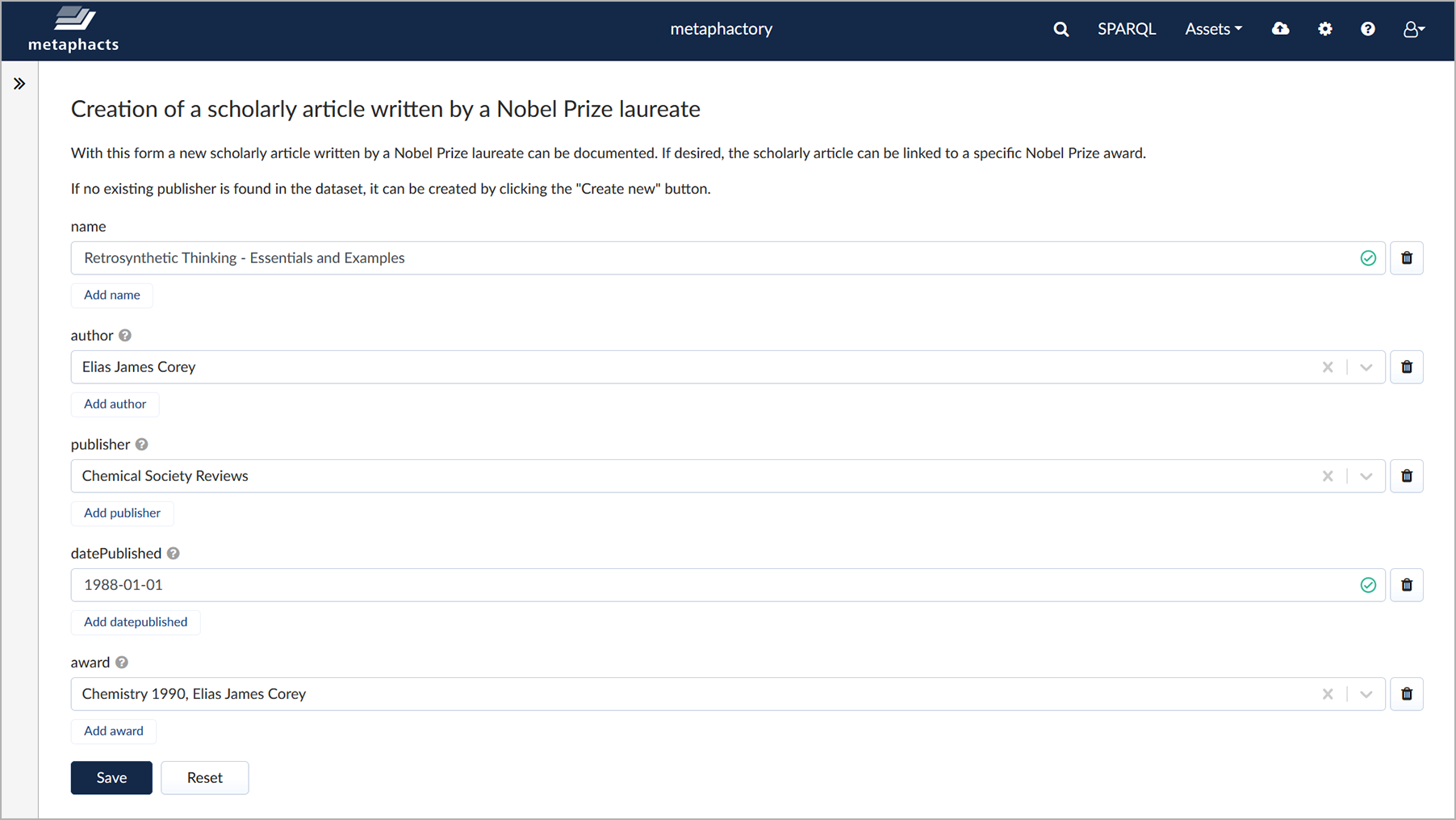 If we now search for Retrosynthetic Thinking – Essentials and Examples in our knowledge graph, we will see4 that this entity is related to Elias James Corey via the author relation, with the "Chemistry 1990" Nobel Prize award via the award relation, and with "Chemical Society Reviews" via the publisher relation. The search result does not only prove that we saved the data about the article, but also that we successfully connected it to already existing data from the Nobel Prize dataset. 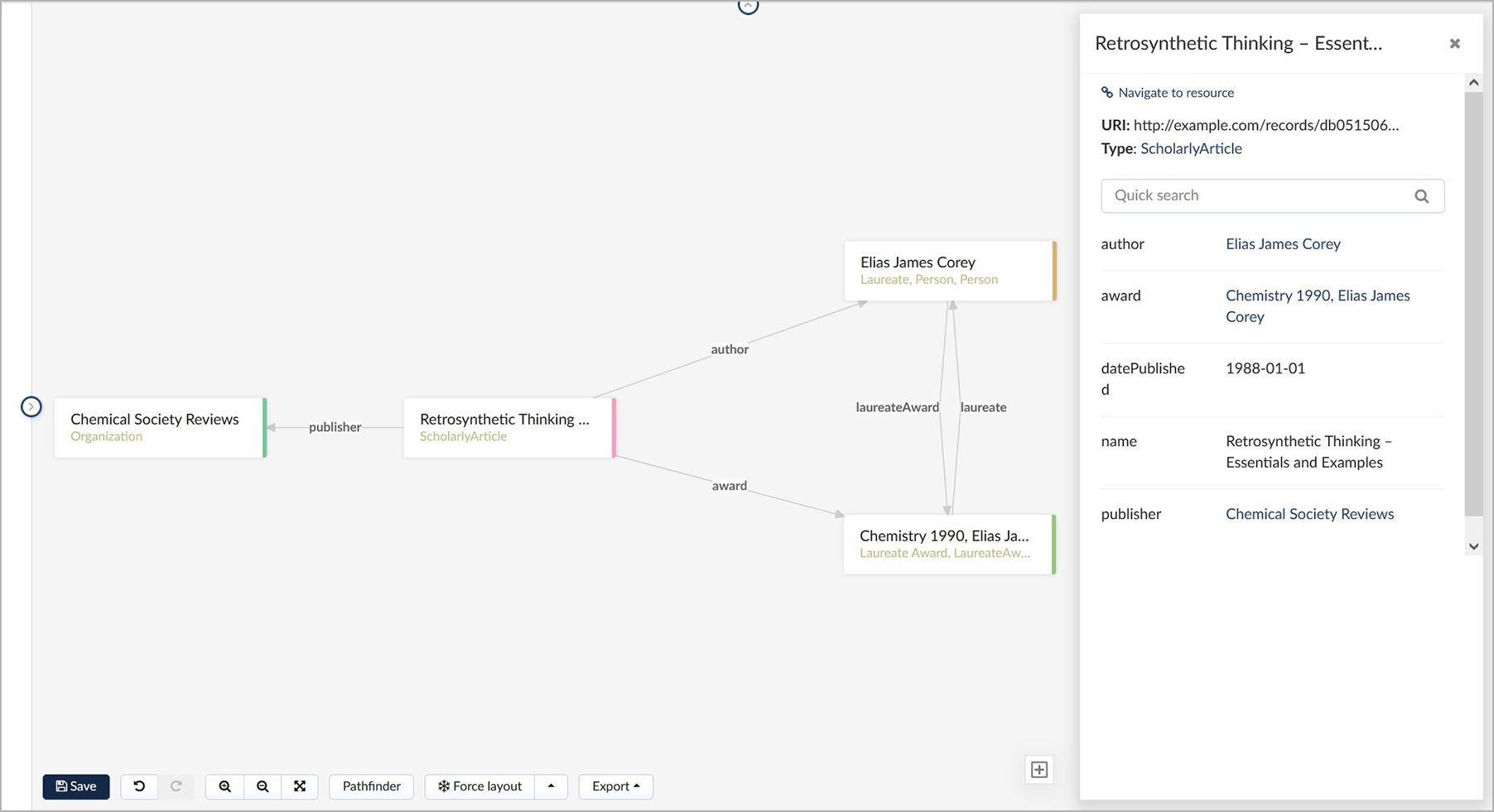 This sounds cool! How can I try it myself?

And, of course, don't hesitate to reach out if you want to learn more about how implementing metaphactory and following our approach can accelerate your knowledge management initiatives and bring you from idea to production in just one month.

Make sure to also subscribe to our newsletter or use the RSS feed to stay tuned to further developments at metaphacts.

1 Ontologies are semantic data models that define the types of entities that exist in a given domain and the properties that can be used to describe them. To learn more about metaphatory's ontology modeling capabilities, have a look at this blog post »

2 The snapshot of the dataset linked to this blog post contains data up to 2013 and can be downloaded here (note that that your browser might already unzip the file without properly changing the ending). This public dataset is licensed under Creative Commons Zero (CC0) and free to use as stated by the Terms & Conditions of the Nobel Prize website.

4 This diagram was produced by first providing additional configuration parameters for the label service which allows us to define the attribute to be displayed as a label for each resource type. In our case, we used the attribute "name" as a label for instances of the ScholarlyArticle class. More about configuring the label service can be found in a dedicated help article »

5 Please note that your browser might already unzip the file without properly changing the ending.

As Director of Customer Success at metaphacts, Dmitry is responsible for making sure that our clients have a positive and rewarding experience with metaphactory and he drives many customer-oriented product improvement initiatives to make this experience even smoother.